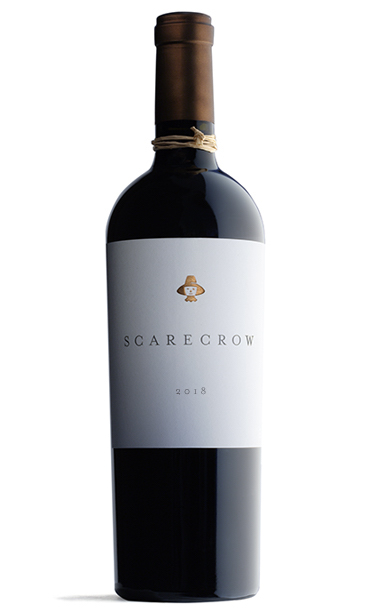 After the blazing heat of 2017, the growing season of 2018 was one of the coolest in recent memory.

The 2018 growing season can best be summarized with the word moderation. Although the winter rainfall was much less than in the prior year, the rain gave our vineyards completely saturated soils as the vines began their grand period of growth in late spring. Likewise, summer’s moderate undulations of warming and cooling trends gave the ripening clusters a week of moderate stress followed by a week of recovery, then back through the cycle again. This slow, methodical ripening is immediately apparent when one tastes the resulting wine from this season.

The 2018 Scarecrow Cabernet Sauvignon shows fully ripe aromas, vibrant and effusive, of blackberries on the vine, dusty cherries, and a sense of fresh earth. On the palate the wine broadens to express its Rutherford character with bright red and blue fruits as well as darker tones of mocha and vanilla. The tannins show polish and power in the same moment, offering a glimpse of the wine as it may evolve in the coming years and decades.

Harvested completely by hand at night, between September 24 through October 19, 2018, this wine is entirely grown on the J.J. Cohn Estate in Rutherford, Napa Valley. The berries were destemmed, optically sorted, and fermented in small batches. After approximately 24 days on skins the fruit was gently pressed and transferred to French Oak barrels, of which roughly 80% were new barrels. The juice was kept in these barrels for about 10 months, then assessed for quality before the first assemblage was created in summer 2019 and the blend was finalized in January 2020. After a total of approximately 22 months in French oak, the wine was bottled in late July 2020 without fining or filtration. A total of 1800 cases were produced.