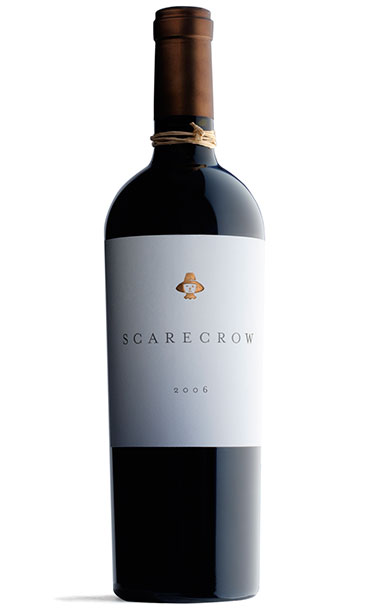 HARVEST NOTES
Vineyard Manager Michael Wolf:
The 2006 season in Napa Valley was marked by the kind of active weather that keeps grape growers sharp, from January floods to record heat in July to cool fall temperatures that extended the growing season and allowed for the development of complex and concentrated flavors. The 100% Cabernet Sauvignon that is Scarecrow was harvested between October 3 and October 23, 2006 from four separate blocks of vines on the J.J. Cohn Estate in Rutherford.

TASTING NOTES
Winemaker Celia Welch writes of the 2006 Scarecrow:
The nose is immediate and intense, predominated by aromas of blackberry tea, black currant, cinnamon bark, dark cherry juice and a hint of lavender. On the palate, the initial impression is of full, rich, very juicy sweet fruit. As that opens over time, black cherry juice and subtle vanilla tones emerge and linger. The finish is broad, textured and full-bodied. The finished wine was bottled without fining or filtration on June 6, 2008.

Grapes from the esteemed Old Men vines were fermented in an open-top tank and punched down three times daily. Fruit harvested from the remaining lots was fermented using pumpovers and cap irrigations. The wine was transferred directly from the press to small, 100% new French oak barrels and allowed to age separately for the first year. In summer 2007, the lots were carefully combined, and the wine spent the next eleven months in barrels as a final blend. Production for this vintage totaled just under 800 cases.