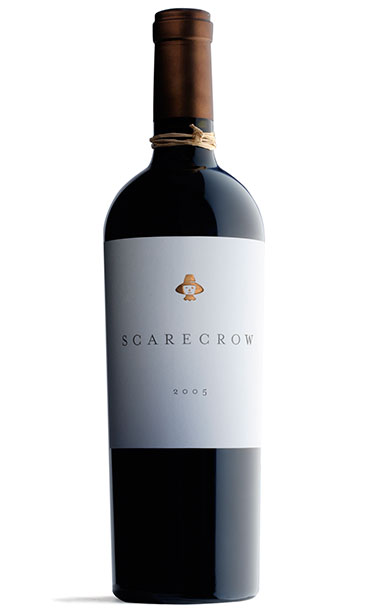 HARVEST NOTES
Vineyard Manager Michael Wolf:
The 2005 growing season was slightly cooler and wetter than normal in the Napa Valley, with a warm spell in March just as bud break was occurring. Substantial rains in May and June spurred rapid growth and high cluster counts. This necessitated multiple crop-reducing passes through the vineyard to promote quality and even ripening. Mild temperatures throughout summer and early fall were highly favorable for flavor development and maturation. The 2005 fruit is being likened to that of 1997, which saw a large yield of outstanding quality.

TASTING NOTES
Winemaker Celia Welch writes of the 2005 Scarecrow:
A mix of intensely ripe cherry, blackberry and dark plum aromas blend with floral notes of lavender and rosewater and the sweet spice of milk chocolate, cinnamon bark and warm vanilla custard. As the wine opens in the glass, faint hints of caramel and honey emerge. The palate entry is dominated by dark berry and chocolate flavors, then broadens to include vanilla, fruit and forest floor notes. Texturally, the wine feels like heavy satin in the mouth, with only the finest-grained tannins adding structure to the finish.

This 100% Cabernet Sauvignon was harvested from four separate blocks of vines on the J.J. Cohn Estate between October 3 and October 12, 2005. Fruit from the Old Men vines was fermented in an open tank and punched down manually. The remaining lots were fermented using thrice-daily pump-overs and cap irrigations. The wines were aged in separate new French oak barrels for the first year, then blended and barrel aged an additional nine months. The finished wine was bottled unfined and unfiltered in June of 2007, with production totaling 881 cases.