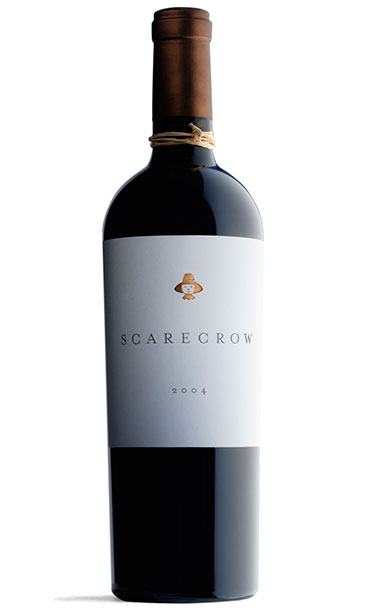 HARVEST NOTES
Vineyard Manager Michael Wolf:
The 2004 California grape harvest was among the fastest and earliest in recent memory, producing lighter yields of exceptional, almost decadent fruit. This 100% Cabernet Sauvignon was harvested from 4 separate blocks of vines on the J.J. Cohn Estate in Rutherford between September 3 and September 12, 2004.

TASTING NOTES
Winemaker Celia Welch writes of the 2004 Scarecrow:
Initial aromas of this ink-dark Scarecrow vintage are deeply ripe raspberries on the vine, black cherries and milk chocolate. With time, notes of root beer, anise and sweet forest-floor emerge. The palate is exceptionally soft. Smooth at entry with an intensely fruit-driven midpalate, the finish lingers in cherry and mocha flavors as the silky texture slowly dissipates. The finished wine was bottled without fining or filtration in late July of 2006.

Grapes from the oldest vines were fermented in an open-top tank and punched down three times daily, while the other fruit was fermented using pump-overs and cap irrigations. The wines were transferred into small, 100% new French oak barrels directly after pressing and aged separately for the first year. In summer of 2005 the separate lots were carefully combined and spent the following 13 months as a final blend in barrels. Production for the 2004 Scarecrow totaled 312 cases.